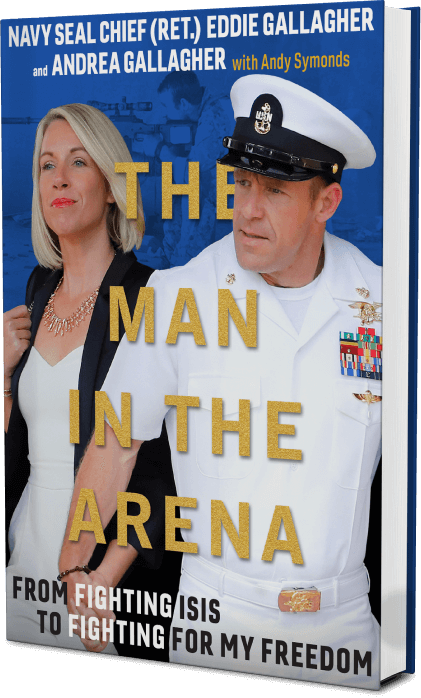 The Man in
the Arena

From Fighting ISIS to Fighting for My Freedom 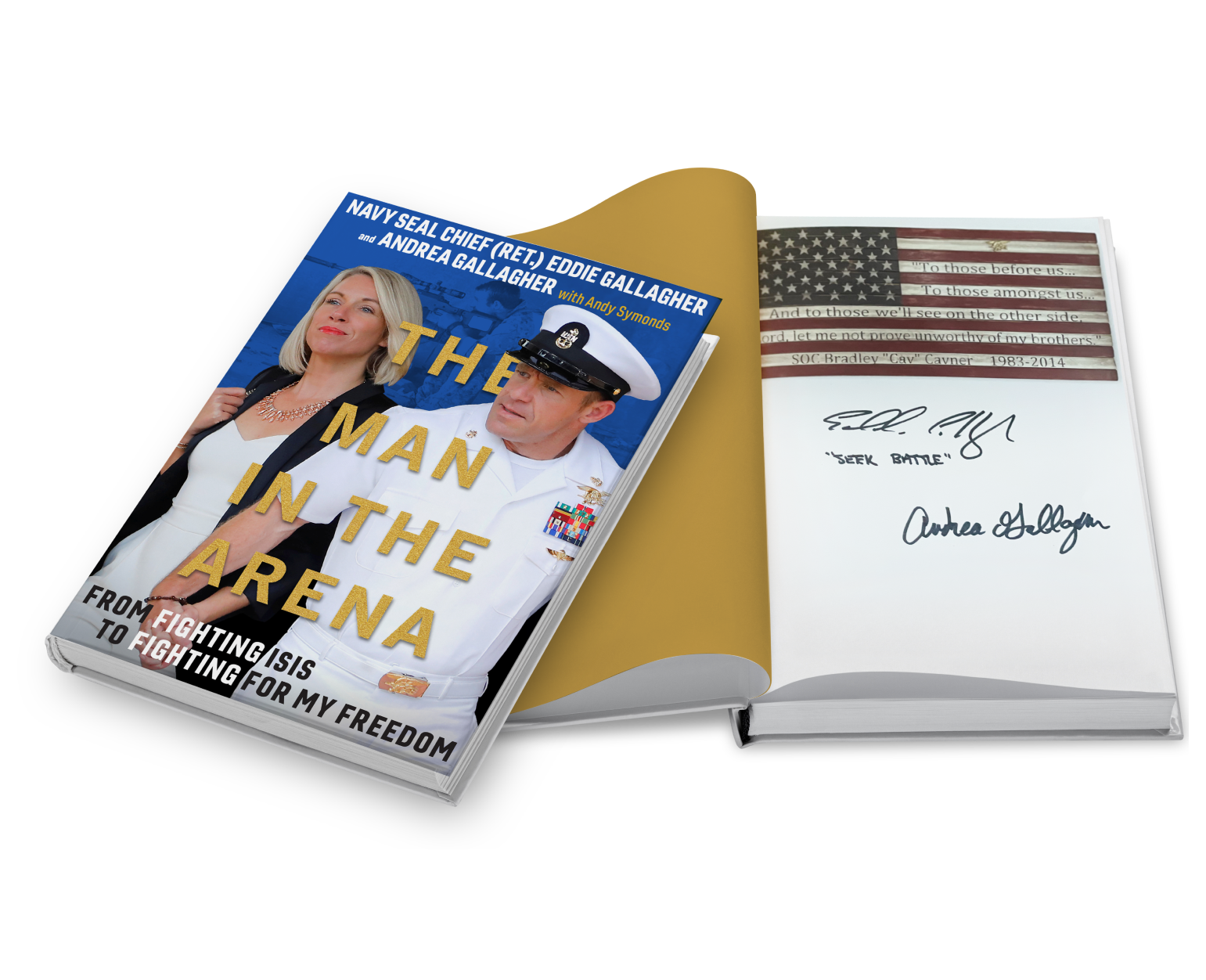 The Signed & Personalized hardcover copy of The Man in the Arena: From Fighting ISIS to Fighting for My Freedom by Navy SEAL Eddie and Andrea Gallagher.

*International shipping for this product not available. Please be patient, as Chief Gallagher’s travel schedule can delay personalizations. 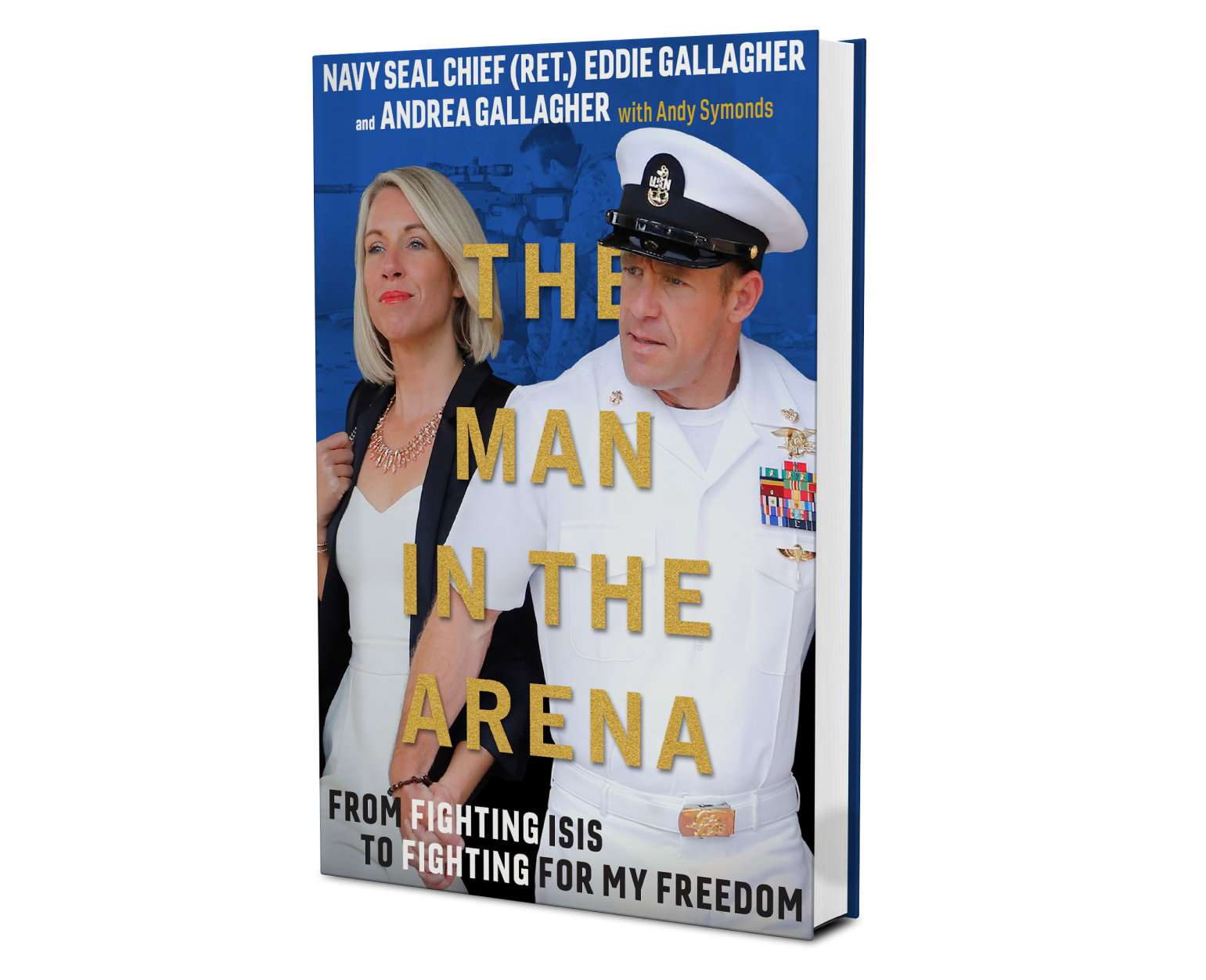 The hardcover copy of The Man in the Arena: From Fighting ISIS to Fighting for My Freedom by Navy SEAL Eddie and Andrea Gallagher.

The hardcover copy of The Man in the Arena: From Fighting ISIS to Fighting for My Freedom by Navy SEAL Eddie and Andrea Gallagher.

You may think you know Chief Eddie Gallagher’s story, but you have no idea. Until Now.

The Man in the Arena: From Fighting ISIS to Fighting for My Freedom, by Eddie and Andrea Gallagher.

On September 11, 2018, Chief (SEAL) Eddie Gallagher was suddenly arrested at the medical facility where he was receiving treatment for traumatic brain injuries. He was taken to a military brig and held in solitary confinement without being told what he had been arrested for or how long he would be there.

Eddie would spend nine months in prison largely being denied medical treatment, access to legal counsel, and regular visits. His family was terrorized by the government while the press vilified him as a monster. Even after a jury of his peers found him innocent of murdering an ISIS fighter, there still exists a perception that Chief Gallagher got away with murder and was pardoned by President Trump. Neither are true.

Chief Gallagher’s Story In His Own Words...

The Man in the Arena is Chief Gallagher’s opportunity to tell the true story of what happened during the fight for Mosul. He doesn’t hold back when explaining how and why several malcontents in his SEAL platoon conspired to frame him for war crimes. He goes into detail about their motivations, and why the Naval Special Warfare leadership didn’t back him. He exposes a corrupt military justice system that denied him his rights at every turn. Finally, Eddie explains exactly what happened that May afternoon in Iraq when after a fierce battle with ISIS, a half-dead terrorist was brought to the SEAL compound for medical aid and died in their care.

Eddie Gallagher joined the Navy at age 19. All he wanted to do was fight for his country and become a United States Navy SEAL. For almost 20 years, he did both (15 of those years in the SEAL Teams), earning a stellar reputation along the way. Eddie deployed 8 times, including to war zones in Africa, Iraq, and Afghanistan. In 2014, Chief Gallagher was named the Sailor of the Quarter and then Sailor of the Year for NSW Group One (all West coast-based SEALs). During his career, Eddie was awarded 2 Bronze Stars with V for Valor, Meritorious Unit Commendation, Presidential Unit Citation, 2 Navy Commendation Medals, 3 Navy and Marine Corp Achievement Medals—1 with V for Valor and 5 Good Conduct Awards.

Eddie and Andrea are now dedicated to telling the true story of what happened to Eddie while ensuring other warfighters aren’t similarly treated as disposable pawns: They have started a non-profit organization called the Pipe Hitter Foundation

They had me fully shackled. Leg irons winding up to wrist cuffs, chains rattling as I shuffled through intake. The jumpsuit I had been supplied was three sizes too big and hung loosely over prison-issued tightywhities.

They led me down a dingy hallway underneath dim fluorescent lights. Sloppy guards in a heightened state walked closely on either side. What were they afraid I’d do? I’d later learn each time they moved me those first few days, the prison went on lockdown.

“Know why you’re here?” I turned to the guard who had addressed me. A pudgy chief. He looked nervous, as if transporting Hannibal Lector, while still maintaining an aura of smugness. No, I thought. I don’t. I have no idea why I am here. Did he expect me to answer? Was he going to tell me?

“Killing ISIS?” I answered, unsure.
“Yep,” he nodded, then I heard a buzz and he yanked open a cell in the solitary confinement wing. I was ushered inside claustrophobic concrete walls.

“On your knees,” one of the guards ordered. I did it. “Lean against the bed. Face the wall.” I complied. Carefully, the guards approached from behind and removed my leg irons. A warning was issued to not move. They backed through the doorway.

“Walk to the door. Turn around.” Each command echoed in the cramped, cinder-block cell. They removed my handcuffs. I rubbed my wrists, more out of reflex than from pain. Then the heavy metal door slammed shut, leaving me alone with my confusion and shock.

I had no idea at the time that I would remain in that prison for the next six and a half months, housed with child molesters and rapists, access to my family, friends, legal team and medical care severely limited. Only after President Trump intervened would I eventually be moved to less restrictive pretrial confinement in order to assist in my own defense on false charges of war crimes. Charges I would eventually be found not guilty of by a jury of my peers, except one for taking a picture with an enemy corpse.

Not that anyone seemed to be concerned with the truth. From the onset, each participant in this charade was motivated by one of three things: protecting their career, advancing their career, or ruining mine. I didn’t yet understand any of that. I was just trying to figure out what I was doing in prison.

Complete the form below to contact us regarding Press Inquires or for more information.